Another edition of miscellaneous items, not enough to build a post around, but certainly worth a mention. 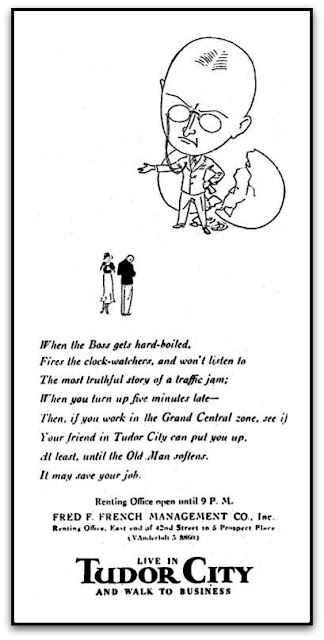 For our first example, an advertisement from 1931. Here's the poem that accompanies it:

When the Boss gets hard-boiled,
Fires the clock-watchers, and won't listen to
The most truthful story of a traffic jam;
When you turn up five minutes late ‒
Then, if you work in the Grand Central zone, see if
Your friend in Tudor City can put you up.
At least until the Old Man softens.
It may save your job.

What it all means is, well, anyone's guess. Check out our earlier story of this ad campaign, here. Another view of the Tudor Theatre; even at midday, it's hard to make out what is playing given how dark everything is because of the El. Named in honor of Tudor City, the theater was located one block over on Third Avenue and East 41st Street. 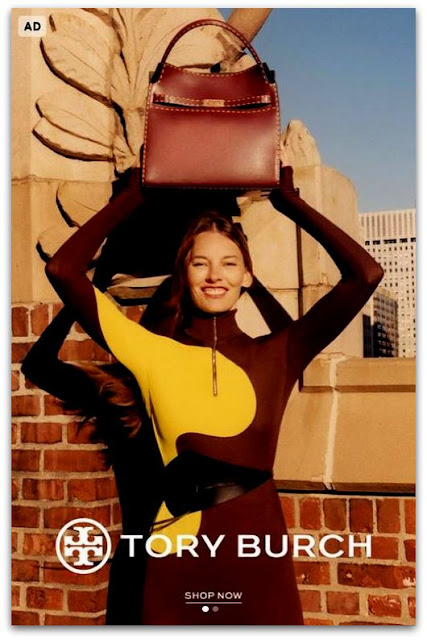 A photo shoot for Tory Burch yielded only this image on her website. Oh, well. 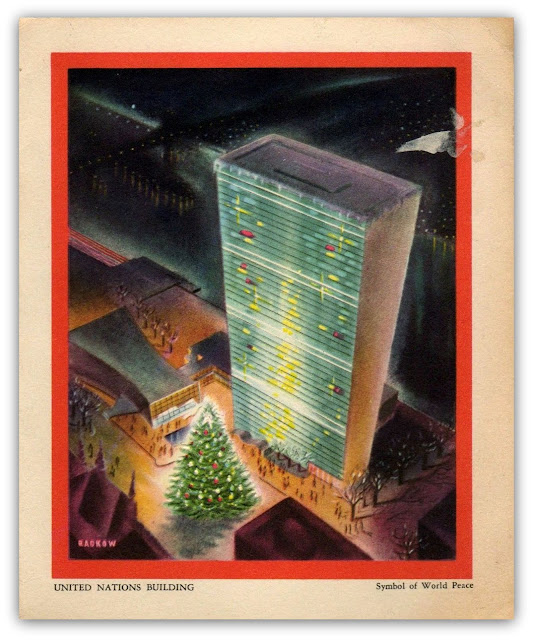 A CASINO and a FERRIS WHEEL for the Vacant Lot?


Introducing Stefan Soloviev, son of the late Sheldon Solow (who died in 2020) and now the billionaire owner of 9 West 57th Street, which made his father famous, along with countless other properties. Including a three-block-long stretch along First Avenue near the U.N.

In an interview with Bloomberg last Monday, Soloviev announced he is currently in talks with Las Vegas gaming companies for a venture to develop the site ‒ if he wins one of the three casino licenses the state is issuing. His current plan includes a 1,000-room casino/hotel, a four-acre park, a Ferris wheel and a museum dedicated to democracy. "It's really exciting to take that site and look at what it can become," said Soloviev.

Your reactions are welcome in the comments.

Many thanks to David Reiff for the tip.

WAYBACK MACHINE: Where Was Corcoran's Roost? 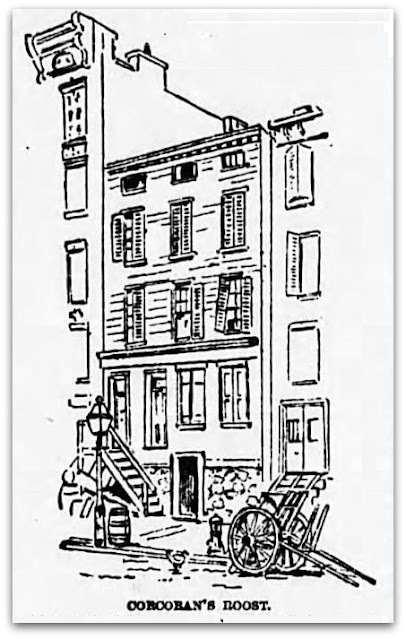 James 'Paddy' Corcoran is a fabled character in pre‒Tudor City lore. He made his name during New York's Civil War Draft Riots ‒ as one of the profiteering rioters ‒ and went on to rule the neighborhood until the post-War prosperity of the 1870s over-ruled him. Now there is some new intelligence as to the actual location of where he lived.
Corcoran's Roost, as the house was known, was located at 317 E. 40th Street. He had squatted there around 1850 and over time, built it up ‒ the house was given a street number long after it was constructed. It was a plain brick structure, three stories high.
The New York Sun ran an article in October, 1891, entitled Corcoran and His Roost: A Favorite Hanging-out Place for the East Side Roughs. The reporter visited the site accompanied by a policeman; even in 1891, it was still a rough address. There the reporter met James's son, Tommy Corcoran, who, seeing the policeman, invited him inside.

He took the reporter though the house and showed him perhaps the filthiest, most rickety building that stands on Manhattan Island. The ceilings seemed to be trying to scrape acquaintance with the floors; the walls were dirty and cracked; everything was covered with filth; the only colors visible were dirty gray and dirty black; in every corner and cranny, the refuse of months had accumulated, while the odor from the stable and the stench from the yard mingled freely with the air in the rooms. Several of the rooms contained nothing but chairs, and looked like meeting places. . .

Here lives James Corcoran, the owner, his wife, his three sons, his two daughters and some of the men that work in the stable. The reporter saw Corcoran, but there was such a vicious look on his old face, and he looked so grim as he fingered an iron rod that the reporter decided against questioning him. Tommy evidently suspected something, for he pushed his father into a room and slammed the door shut. Then the reporter went out into the open air and left Tommy standing on the steps of Corcoran's Roost, scowling viciously. The policeman said:
"There's a pretty tough crowd that hangs out there. They don't do much besides 'rushing the growler' [getting drunk] and fighting amongst themselves. As long as they leave respectable people alone, it's best not to interfere with them. The sooner they all kill one another, the better it will be."

And there's a bonus, a drawing of Corcoran. It's not much of an image, but judge for yourself: 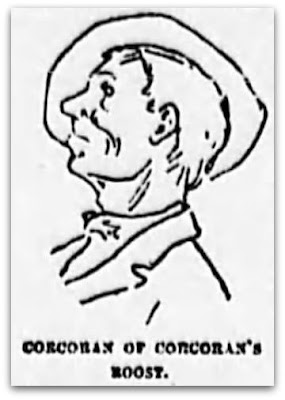 *  *  *  *  *
Some time later, just before his death in 1900, Corcoran stated "I have been forty-eight years at that house," and we don't doubt him for a moment.
No comments:
Email ThisBlogThis!Share to TwitterShare to FacebookShare to Pinterest
Labels: Confidential, Wayback Machine

The holidays are fast approaching and this year we've picked the best of Tudor City in categories ranging from T Shirts to Face Masks. Here are the winners: 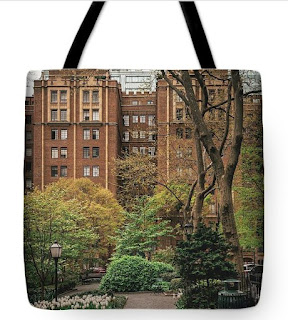 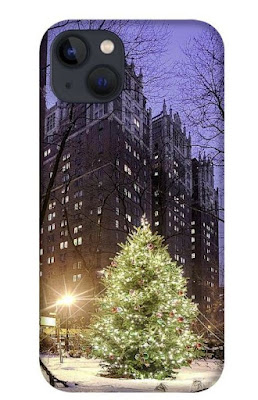 Above, the future site of Tudor City as shown on a 1899 map. This map was made for fire insurance purposes; pink represent brick structures, yellow signifies wooden ones. We have included the blocks from First Avenue to the river on the map, which we will focus on today.

At 43rd St. and First Ave., on the same side of the street as The Cloister and The Manor, was the first of the Abattoir Center's giants, the United Dressed Beef Company. It consisted of Slaughter Houses, Hide Houses, Refrigerator Houses, Oil Houses and Fat Houses. Outdoors were the Cattle Pens, along with a freight shed for the Lehigh Valley Railroad, oddly enough.

At 42nd St. and First Ave., opposite No. 45, over half of the space was given over to a Wagon Yard and the Storage of Gas Pipes. The remainder included a Stone Yard, Barrel Storage, a Carriage House, a Stable, a Refrigeration House, and Slaughter Houses.

At 41st St. and First Ave., opposite No. 25, lay the New Amsterdam Gas Company. It was made up of Purifying Houses, a Lime House, an Engine House, a Meter House, a Condenser House, a Generating House, a Retort House, and a Coal House. An ominous-looking circle was identified as a Gas-holder.

At 40th St. and First Ave., opposite No. 5 and also part of the New Amsterdam Gas Company, were five more Gas-holders, two Coat Houses, and in the smaller circles, Naphtha Tanks, buried underground.
In 1901, the New York Edison Company took over the land and opened a power plant with a slightly different footprint. It was decommissioned in 2005, and the three-block-long tract has lain vacant ever since.
2 comments:
Email ThisBlogThis!Share to TwitterShare to FacebookShare to Pinterest
Labels: Artifacts, Wayback Machine

Bautista made these to illustrate a paper called "Saving Tudor City: The Thrill of Victory" by Tim Maldonado, published by the New York City Technical College in its magazine Perspectives. The 'victory' mentioned was the guarantee that Tudor City's green spaces would remain parks in perpetuity. This had been signed into law in 1988, and this paper was published two years later.

The search for author Maldonado proved fruitless, but J. F. Bautista is ever active. Visit his website here. 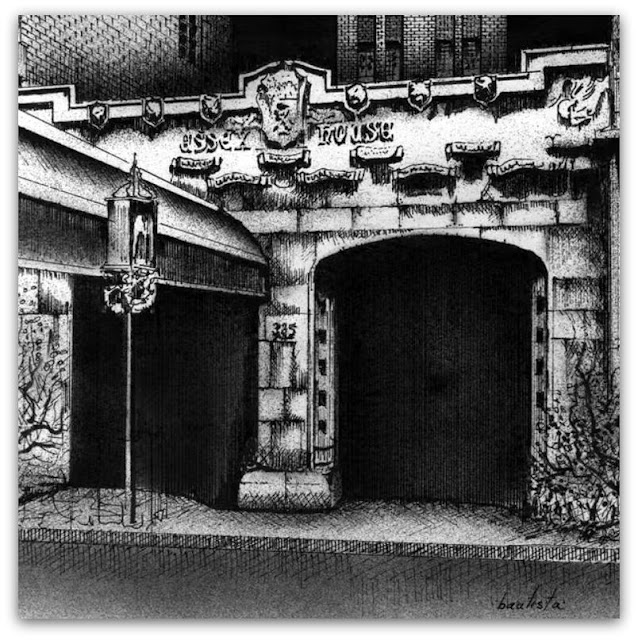 The front entrance of Essex House. 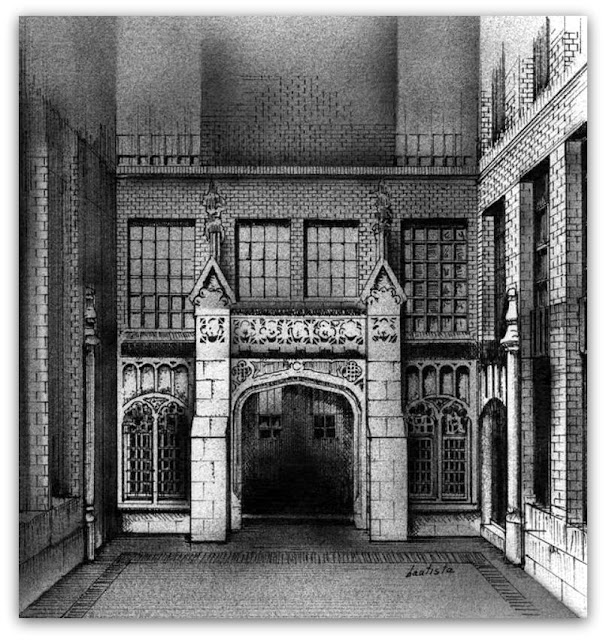 A side entrance to The Manor. 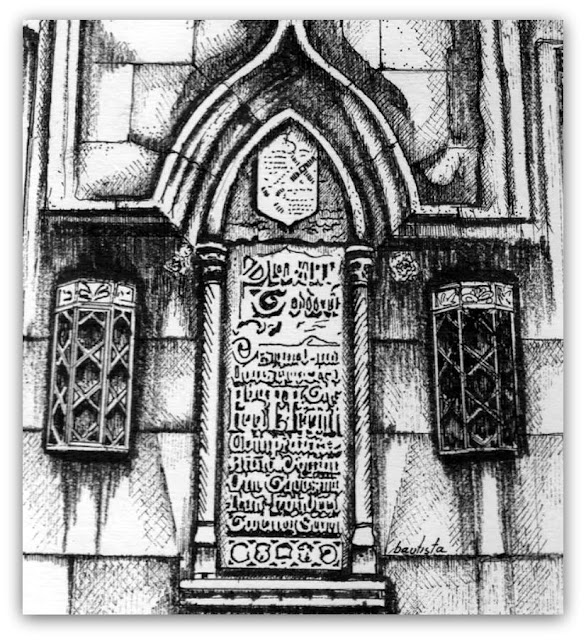 A close-up of the plaque on Prospect Tower. This rendition has the old-style lanterns. 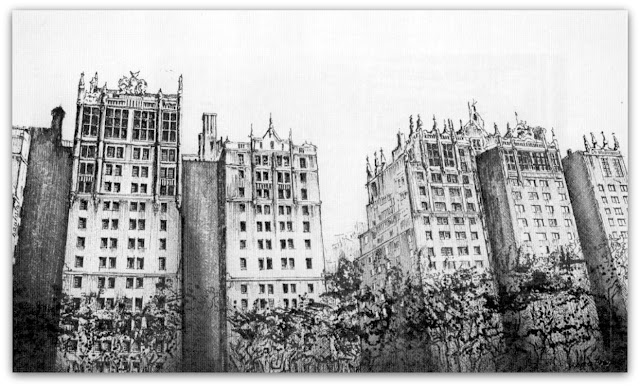 A study of two buildings, No. 25 and No. 5.
No comments:
Email ThisBlogThis!Share to TwitterShare to FacebookShare to Pinterest
Labels: Essex House, Manor, Prospect Tower / No. 45, Tudor Tower / No. 25, Windsor Tower / No. 5 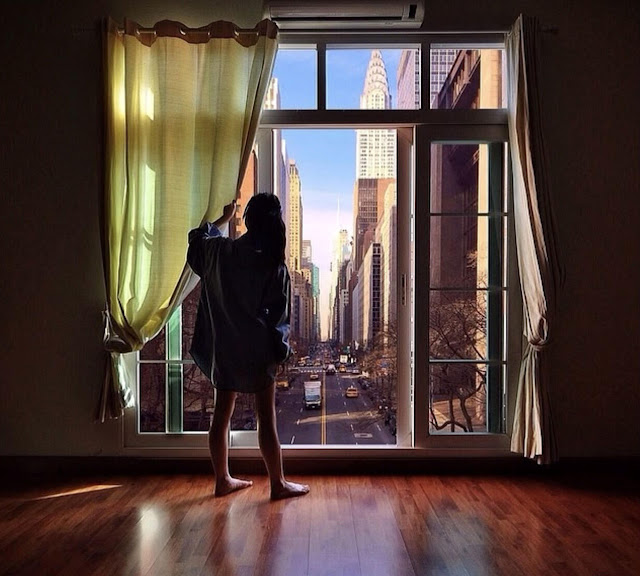 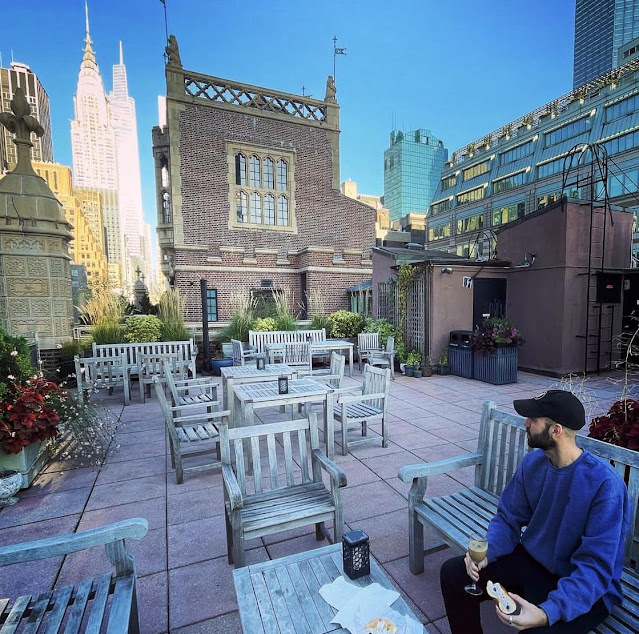 The Manor Rooftop at Breakfast by tommyrudnick 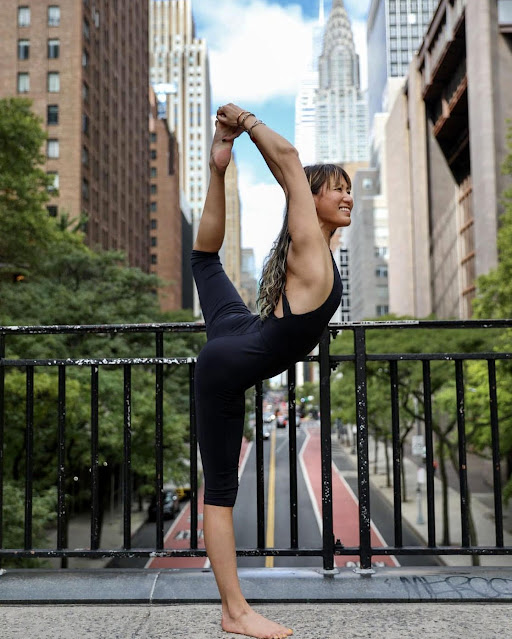 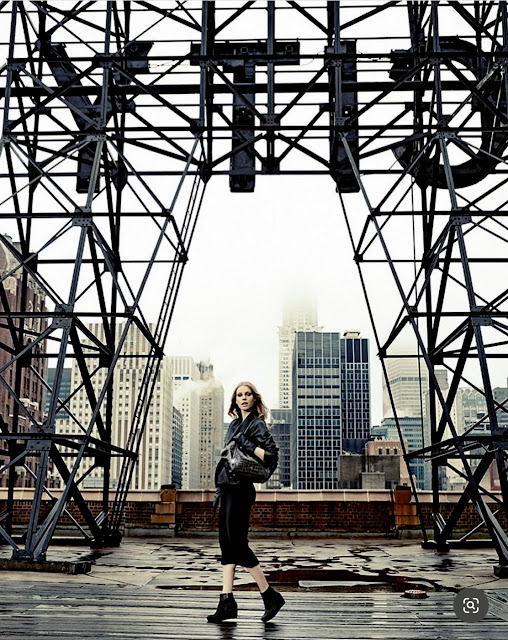 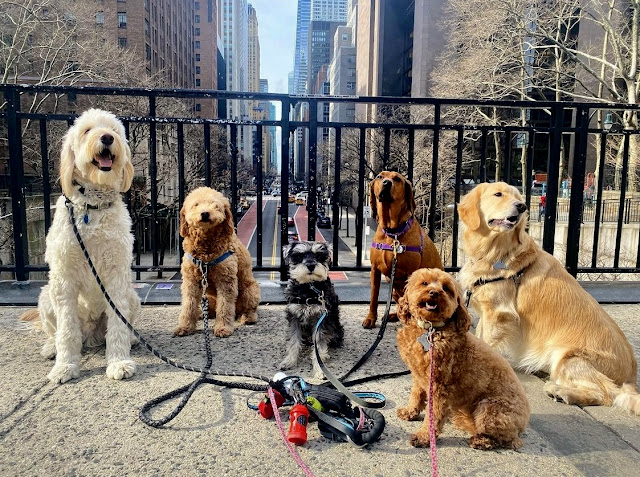 Waiting for a Bone by citydogpack 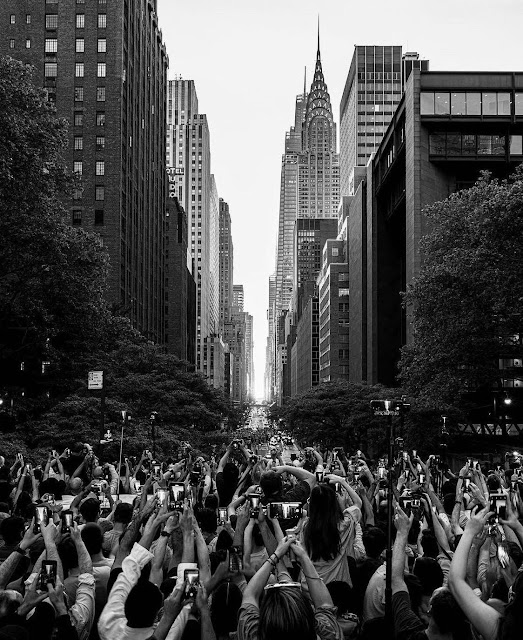