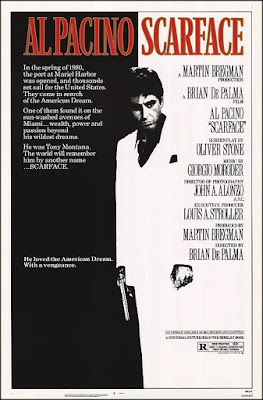 The first post of a series about movies shot in Tudor City.

We begin with arguably the most memorable sequence ever filmed in the neighborhood, the 1983 Brian De Palma movie Scarface, starring Al Pacino. Although critically panned for its over-the-top violence when first released, it's acquired cult status over time, even introducing a catch-phrase to the national lexicon, say hello to my little friend.

One of the set pieces in the film is a tense sequence shot in Tudor City in the fall of 1982, one of the most famous scenes in the picture.

As the scene begins, Miami drug kingpin Tony Montana arrives in New York to oversee the assassination of a journalist whose investigative reporting threatens Montana's cocaine cartel. The journalist resides in No.5. 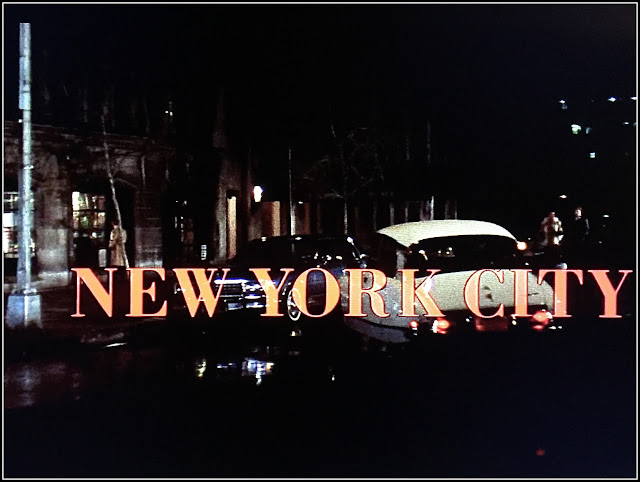 Title card announcing Montana's arrival in New York, No. 5 in the background. 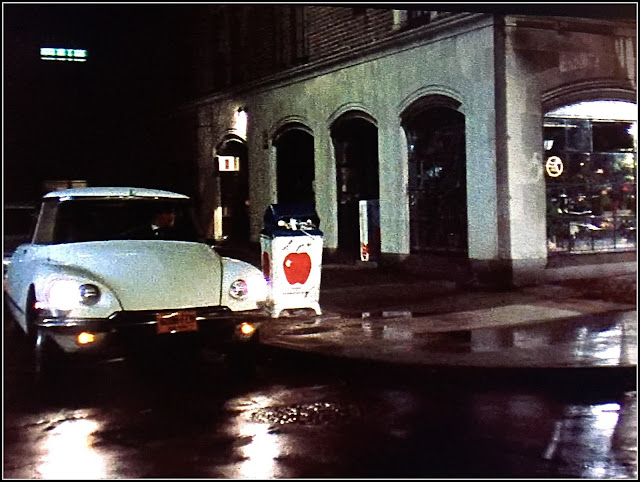 The journalist whom Montana is planning to assassinate parks his car in the 41st Street cul-de-sac and enters the building. 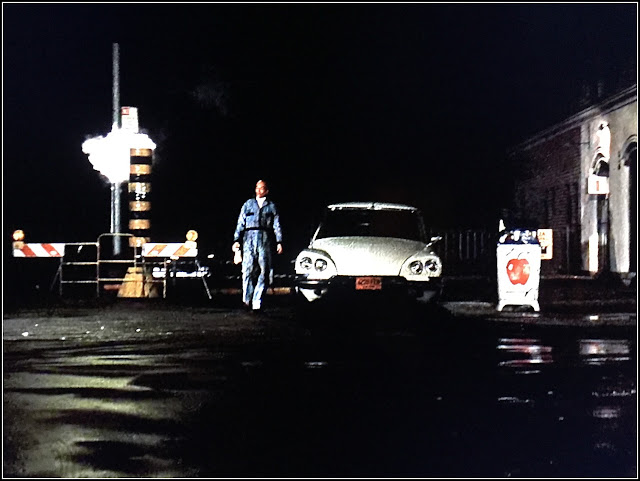 Moments later, Montana's henchman tapes a bomb to the undercarriage of the car. The background music ‒ by Giorgio Moroder ‒ swells ominously. 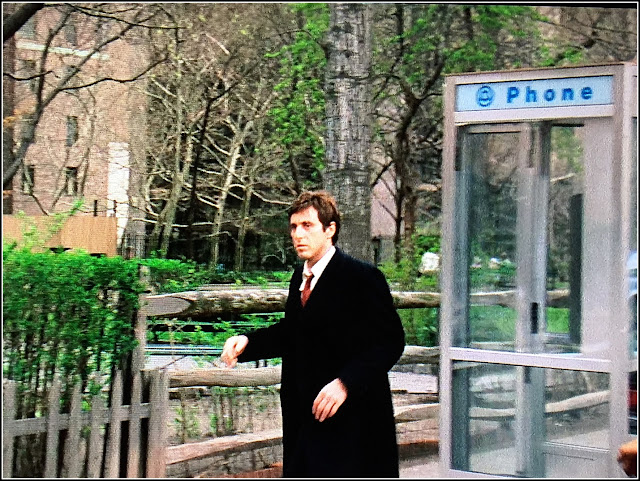 The following morning, Montana makes a phone call confirming that the bomb will be detonated when the car is in front of the United Nations.

(Behind Pacino is the South Park, near the corner of 41st Street. The phone booth is no doubt a movie prop, though the split-rail fence had been a part of Tudor City since the 1950s). 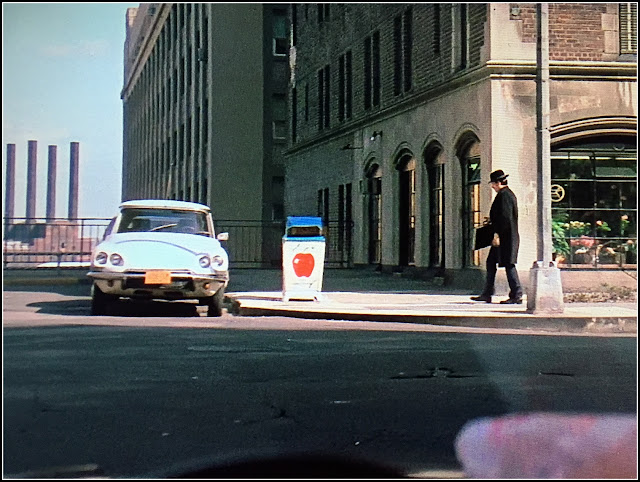 The journalist exits Windsor Tower, headed for his car.

(The smokestacks, once part of the Pennsylvania Railroad Powerhouse across the river in Hunter's Point, were torn down in 2005. The Big Apple red-white-and-blue trash can is probably a relic from the 1976 Bicentennial.) 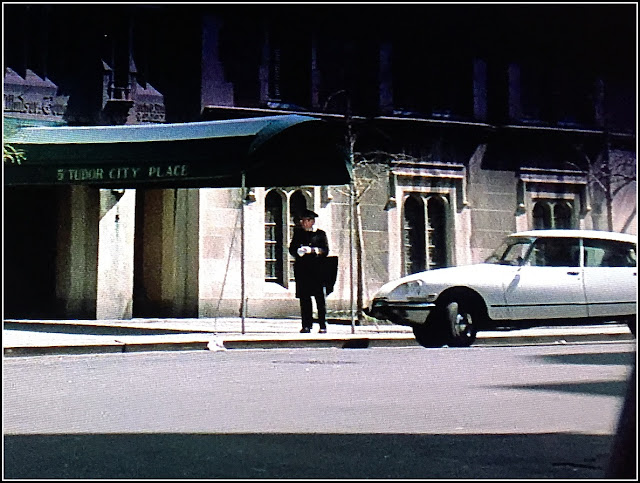 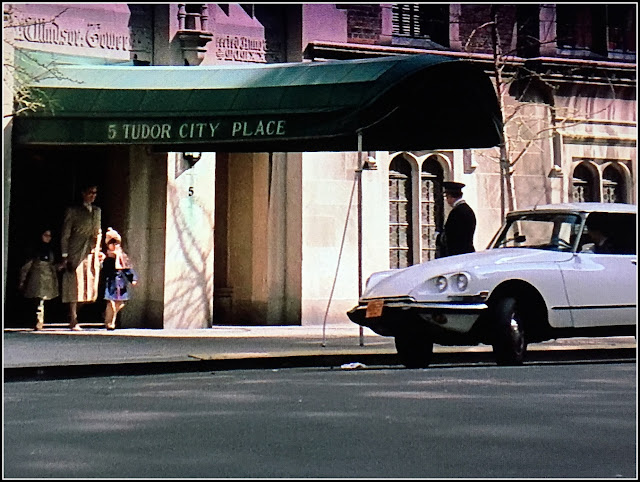 ... and out walks the journalist's wife and two kids, who all get into the car. Cue the Giorgio Moroder soundtrack. 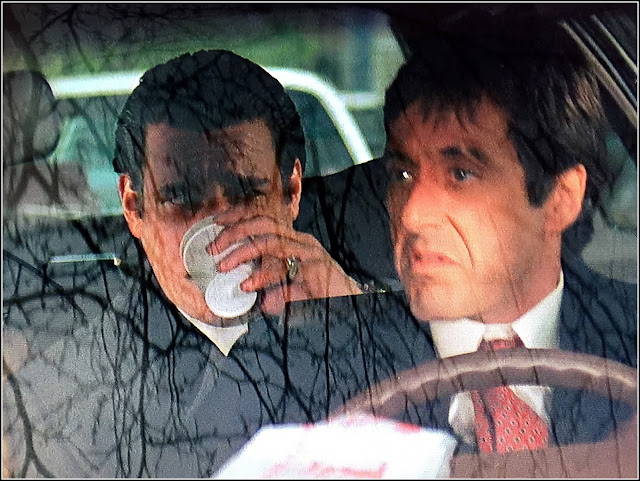 Montana, watching from a parked car on 41st Street, flips out ‒ blowing up the whole family was not part of the deal. "NO WIFE, NO KIDS!!!" he snarls. 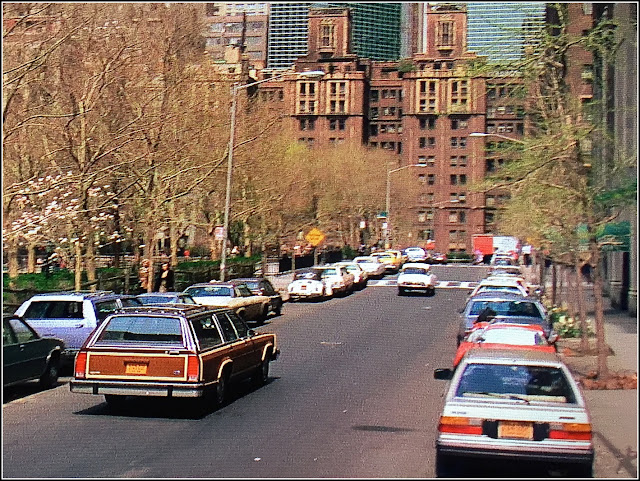 The journalist pulls away, and Montana's station wagon trails him down Tudor City Place. The sequence cuts to First Avenue, where a bloody climax occurs in front of the U.N.

See a partial video of this sequence here.