The PAN AM HELIPORT Kerfuffle

Tudor City’s vaunted peace and quiet was shattered on December 21, 1965, when New York Airways inaugurated helicopter service between JFK airport and a new heliport atop the Pan Am building on Park Avenue. The concept was very Jet Age: a 7-minute trip from the heart of Midtown to JFK (for $7).


The downside was that copters’ flight plan took them directly over Tudor City. Their rotors were loud, and if that wasn't bad enough, there were 50 flights a day ‒ roughly four per hour.

Equally loud protests erupted throughout East Midtown. Mrs. Richard Tully, of 2 Tudor City Place, told the New York Times, “We are trapped by noise. We cannot open our windows. This is a disgraceful way to live.”  Actress Katharine Hepburn (also in the flight path in Turtle Bay) said "New York is noisy and dangerous enough without this nerve-wracking addition of a luxury trade operating to the distress of many and to the benefit of few.”

Speaking for the city, Charles Leedham, deputy commissioner of aviation, disagreed: "I think it’s an excellent thing. It takes traffic off the roads and it’s also a glamorous, exciting part of living in New York City.”

Despite all the picketing, petitioning and letters to newspaper editors, the controversial service prevailed for 26 months, ceasing in February, 1968 ‒ only because it had proved unprofitable.

Years went by, and then helicopter service to the Pan Am roof resumed again on February, 1, 1977. By then, choppers were not as noisy as in 1965, and public reaction was thus more muted. The Times quoted the owner of the Tudor City grocery: “If we heard them, they’d hear our protests.” 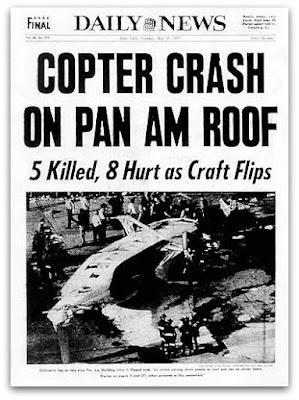 But this second act did not last long. On May 16, 1977, an idling copter tipped over on the heliport, killing four passengers and a pedestrian on the street. That was the end of the experiment. The heliport ceased operation permanently.

Today, the Pan Am building is called the MetLife building, and there are three Manhattan heliports, all positioned on the rivers' edges. A one-way helicopter ride to JFK currently starts at $99.

Email ThisBlogThis!Share to TwitterShare to FacebookShare to Pinterest
Labels: 1960s