Essex House resident Jack Lait was one of the most famed journalists of his era, the editor of the New York Daily Mirror, the racy Hearst tabloid that had the second-largest circulation in the nation during his tenure. His life, in bullet points:

✤ Born in New York City in 1883, Lait is reared in Chicago, where he begins his career as a police reporter for the Chicago American. His big break comes in 1934, when he's the sole reporter to witness the capture (and death) of John Dillinger, Public Enemy No. 1.

✤ Relocates to New York in 1936, when he's named editor of the Daily Mirror. A colorful multitasker, he's said to be the model for the Walter Burns character in "The Front Page." Circulation soon doubles.

✤Heeding the slogan "Live in Tudor City and Walk to Business," he takes an apartment in the Essex House, several blocks away from the Daily Mirror offices at 235 E. 45th St. His coverage of the city's underworld leads to random death threats, and the occasional police guard at the Essex House.

✤ Nothing if not prolific, over the years he writes novels, screenplays, stage plays and short stories, all while editing the Mirror; he even takes over Walter Winchell's column when Winchell is on vacation. He dies after a long illness in 1954. 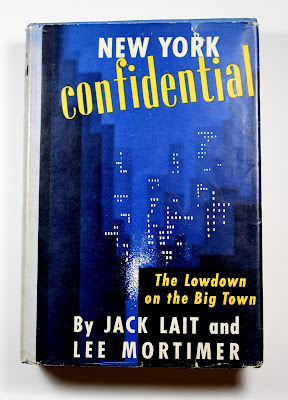 Despite these many accomplishments, Lait is best remembered for his series of "Confidential" books, co-written with his protégé, Lee Mortimer.

The first of the series, New York Confidential, published in 1948, was an unorthodox guide to the city's grittier side -- a "bon vivant's Baedecker of melodramatic Manhattan," in the words of one reviewer. In addition to headwaiters' names, backstage phone numbers and a "Glossary of Harlemisms", there are chapters running the gamut from "Where Men Wear Lace Lingerie" to where to find a "Room with Adjoining Blonde."

Of course, it was hit and spawned similar studies of Chicago, Washington, D.C., and, finally, the whole nation in U.S.A. Confidential. The books sold over 7,000,000 copies. New York Confidential was later made into a film and a TV series, and more lately inspired the name of this blog.


Below, the movie poster and paperback version. 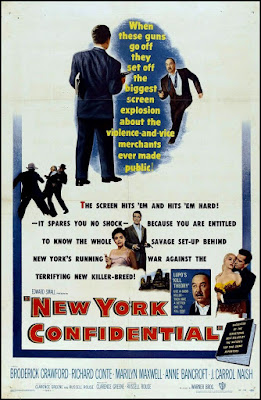 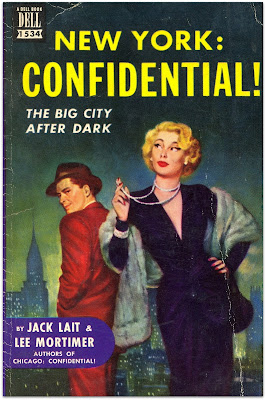