We recently touched on city planner Robert Moses' impact on Tudor City, and today we're going to take a closer look at all the neighborhood changes wrought by this extraordinary, if controversial, master builder.
Robert Moses was a larger-than-life figure in NYC planning from 1924 to 1968. He turned New York into the country's first city for the automobile age, which proved to be a model for the nation at large. Here's his life, in bullet points: 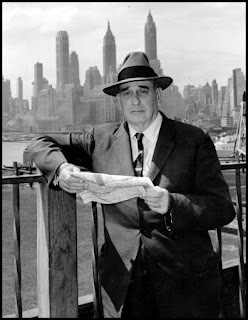 ▷ Born in 1888 to a well-to-do family. After degrees from Yale, Oxford, and Columbia, becomes protégé of NY Governor Alfred E. Smith, and his rise begins.

▷ During his 44-year career as a city planner, his rather dizzying accomplishments include the building of the Triborough Bridge, the Verrazano-Narrows Bridge, the West Side Highway, the Brooklyn-Queens Expressway, the 79th St. Boat Basin, Jones Beach, Lincoln Center, Shea Stadium, and the 1964-65 New York World's Fair. As the city's first Parks Commissioner, he adds 658 playgrounds and 416 miles of parkways to the greater metropolitan area.

▷ He's brash and imperious. Typical quote: "Those who can, build. Those who can't, criticize." Although a great proponent of highways, he never learns to drive, instead keeping a staff of chauffeurs on 24-hour call.

▷ Over time, Moses' vision of the city ‒ essentially highways and towers arranged in a grid ‒ falls out of favor. Demolishing neighborhoods to build expressways had gone out of style. A Pulitzer Prize-winning biography, The Power Broker, is highly critical of his achievements, and when Moses dies in 1981, his reputation is in decline.

In and around Tudor City, Moses was responsible for the following works:

FDR Drive. Begun in 1934, completed in 1955, and revamped many times since, this riverside expressway runs from Battery Park to 125th St. Originally known as the East River Drive, it's renamed after Franklin D. Roosevelt in 1945. Moses came aboard the project when it was in its early stages, and it no doubt influenced his thinking on how to move traffic in Manhattan.

Robert Moses Playground. In the vacant lot adjacent to the Ventilation Building, Moses built this vest-pocket playground. Years later, it's named in his honor.

Tudor City Overpass. Moses played a crucial role in the negotiations to bring the U.N. to Manhattan, and so the clean-up of the area around it was of vital interest to him. High on his agenda was the 42nd Street Tunnel, a notorious traffic bottle-neck, which was demolished and remade as a sleek ornamental bridge in 1952.

First Avenue Underpass. A tunnel running below First Ave. between 42nd and 47th Sts., designed to keep traffic flowing when the General Assembly is in session. Although virtually unseen, it's ultimately Moses' most valuable contribution to the neighborhood.