Established by Miss Edna Traver, it opens on October 7, 1928 at 340 E. 43rd (at left). The schoolhouse proper is the first floor of building, with an an indoor playground (below) in the basement. Instruction ranges from kindergarten to sixth grade.

Traver selects Tudor City because she likes its country-in-the-city feel, and manages over time to secure a small corner of the North Park for the exclusive use of her students. 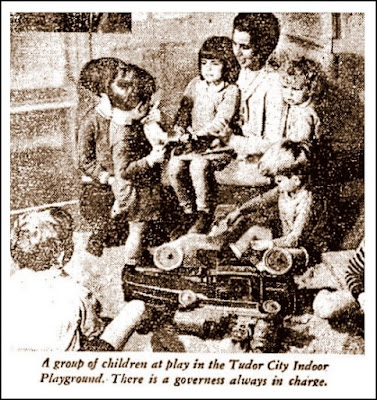 The children put on numerous pageants for the entertainment of residents, among them operettas, musicales, Christmas nativity re-enactments, and the like. Below, they pose for a tableaux having something to do with British history. 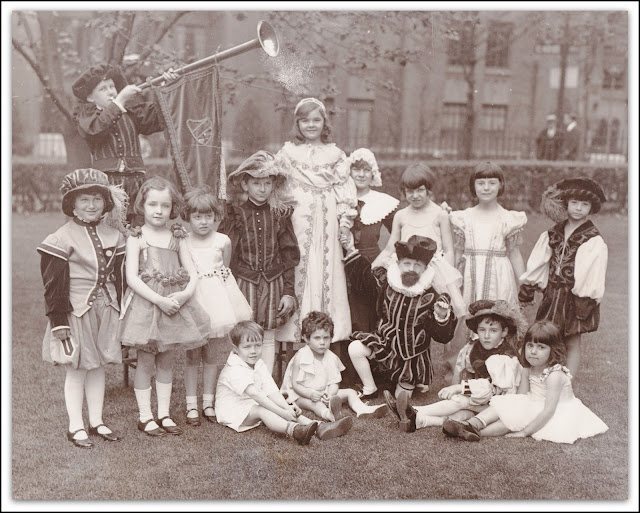 Children of Tudor City, New York City, participated in a tableaux held in the North Park, under the direction of Miss Traver. Photo shows a part of the cast - Robert Houblein, as the "Herald" with the trumpet. The queen, Mary Ruth Pryor (standing center) is the daughter of Robert Pryor, son of the noted bandmaster. William Walker, as William Shakespeare, holds the Queen's hand.

The school has a 26-year run, closing after Miss Traver's passing in 1954. In 1956, it re-opens as the Walt Whitman School, which sputters early on and shutters soon after. Today, the Pre-School of America ‒ set in No. 25's former coffee shop ‒ provides Tudor City schooling.