Continuing our series of posts about various Tudor City shops over the years, here ithe Caruso Beauty Salon.
One of the longest-running businesses in Tudor City, the Caruso Beauty Salon originally opens in Tudor Tower, but moves across the street to No. 5 in 1939, where it remains for over 30 years. Along the way, it launches the careers of two celebrity hairstylists, the owner's sons. Here is the Caruso story, in bullet points.


✴ Founded by Michael Caruso, an Italian immigrant who arrives in NYC as a stowaway and whose first job is sweeping the floor in a barbershop. He leases the original Tudor Tower shop in 1934. It's enough of a hit for him to relocate to cushier digs in No. 5 ‒ and to add a "budget" branch, including a men's barber, in the Hotel Tudor.

✴ It is a true mom-and-pop shop in the beginning. Caruso's wife is a colorist, and their two sons, Julius and Enrico, are part-time apprentices as teenagers. Both boys demonstrate a flair with hair.

✴ By the late 1940s, Enrico is considered the star of the shop. He invents the poodle cut, and movie stars ‒ like Ann Sheridan, below ‒ start showing up. 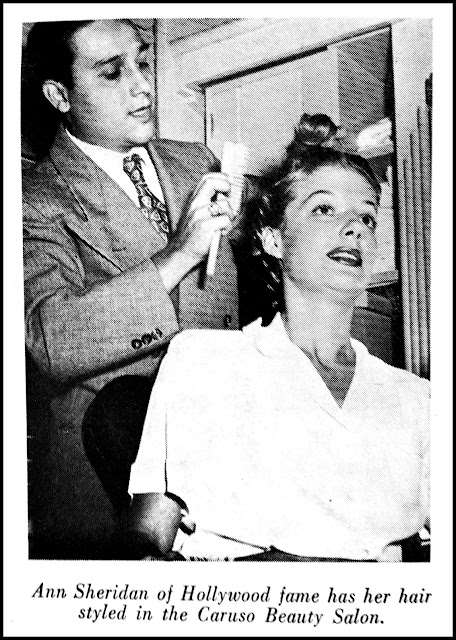 ✴ Julius leaves the Tudor City shop to open his own salon in 1952, and Enrico follows suit, opening his place two blocks away. Talented and personable, they soon are working with big-name celebs (Marilyn Monroe, Audrey Hepburn, Grace Kelly) and famed photographers (Irving Penn, Richard Avedon). The brothers have a friendly rivalry, right down to their endorsement deals ‒ Julius shills for Lilt home permanents, while Enrico endorses Toni, its chief competitor.

Like all good media stars, the Carusos leave behind some choice YouTube clips. See "Hairstyling Hints with famous stylist Julius Caruso" here. Enrico as the celeb guest on the game show To Tell the Truth here.

✴ In 1965, Michael Caruso, the father, retires and sells his Tudor City shop to Mario Caruso, a cousin. It closes, we believe, in the early 1970s.