Save the Date: THE TICK Is Coming! 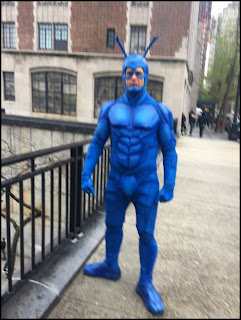 Back in April, we featured a behind-the-scenes look at the Tudor City location shoot for the new TV series, The Tick. And now, the news you've been waiting for ‒The Tick will start streaming this Friday, August 25, on Amazon Prime.

The Tick is based on an '80s comic book series whose title character is a postmodern kind of superhero, goofy and prone to bad puns.

The official trailer for the series has just been released, with Tudor City making brief appearances at 0:51 and 1:05 in the spot. See it here.

Some neighborhood screen grabs from the trailer, below.

Thanks to Bonnie Stokes for this tick alert.