Burton Rascoe ‒ Tudor City scold ‒ is a journalist/editor/ critic who files one of the earliest stories about the enclave's opening. . . and does not like what he sees.

A cantankerous chap with a punchy writing style ‒ his Times obit cites his "skilled command of both bludgeon and rapier" ‒ he's best remembered for his syndicated column, The Daybook of a New Yorker, which appears in over 400 daily newspapers across the country during the '20s and '30s. It's one of many 'man-about-town' columns that are in vogue at the time, when Manhattan was considered the smartest place in America.

The conveniences and inconveniences of New York apartment life cast a great light on present-day marriage. In Tudor City, a group of new apartment buildings at Forty-second St. and the East River, one may have a two-room apartment with facilities for refrigeration, but absolutely no provision for cooking, for $125 a month.

The arrangement is significant. One provides for cocktail-making in today's pied-a-terre, but not for the homely comforts of breakfast and dinner cooked on the premises. Of course, percolators will be used by many, and the transgression will be overlooked by the management. But for the most part, the apartments will be used as jumping-off places. There will be a good deal of quiet, serious drinking, and more not so quiet. And there will be dinner at the restaurant in the building, and no little bride's biscuits burning cheerily in the oven. The cynic, however, may point out that these large buildings are not designed primarily for the earnest newly-married, but for the gayer birds of passage whose "love nests" delight the editors of tabloid newspapers.


The screed is really free advertising for Fred French, whose youthful target demographic would no doubt relish living in a colony of "love nests" and "serious drinking" in buildings "not designed for newly-marrieds but for the city's gayer birds of passage."

Rascoe does bring up a good point about cooking, however. In lieu of kitchens, Tudor City's apartment hotels  ‒ Nos. 5, 25, 45, and The Woodstock ‒ offer serving pantries equipped with a sink and fridge, but no heating elements. The idea is that one would order up hot food via room service, an idea quite plausible in the Roaring Twenties that's a lot less palatable during the Depression. 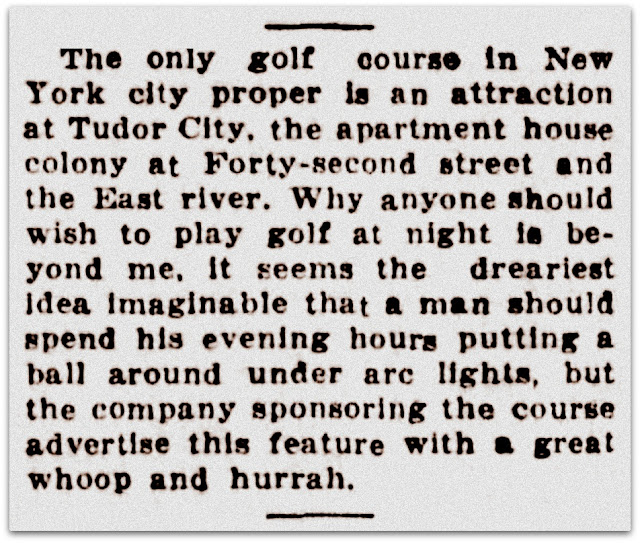 By November 1927, Rascoe seems to have warmed to the enclave. To wit, the following anecdote:

A fashionable looking woman traveling east on a Forty-second streetcar the other night was telling an acquaintance she had moved into Tudor City, the group of new apartments way over at the East River.

"You ought to join us," she told her friend gayly. He had about him the unmistakable air of the thespian. "There are lots of Lambs over there already." But the poor fellow, looking mournful and envious, was already peering out to see if the car had passed Grand Central Station. "But you see, I live in ‒ er ‒ the country," he protested. "That is, 167th Street and Jerome Avenue ‒ the Bronx." And he cast a wistful glance at the lights of Tudor City, across the eastern sky, as he stumbled toward the subway, a good Lamb gone astray.

Rascoe's final mention of the complex runs in January, 1928:

That's Tudor City in a nutshell, heavenly and haughty.