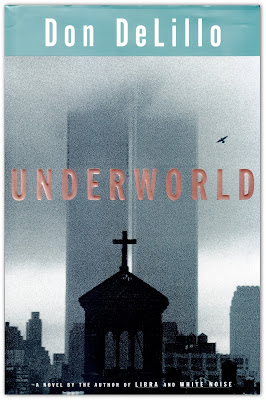 Following up on our last post about the French Company's Fifth Avenue headquarters, we fast-forward to 1997, when the building turns up in a celebrated novel, Underworld, by a celebrated author, Don DeLillo (White Noise, Libra). The book is of especial interest to this blog since it actually asks the question "Who on earth is Fred F. French?"

Set over the second half of the 20th century, Underworld is "an aria and a wolf-whistle" to that era, according to one observer. Its far-flung cast of characters includes historic figures such as Frank Sinatra, Lenny Bruce, Jackie Gleason, J. Edgar Hoover. . . and Fred F. French.

French makes three cameo appearances in the novel. The first occurs when two fictional characters, Rochelle and Klara, are sightseeing in Manhattan with Klara's mother.


. . . they stood outside a skyscraper on Fifth Avenue, it was probably 1934 and the Japanese were entrenched in Manchuria and they looked up the face of the building and walked through the polished lobby and it was the Fred F. French Building, which intrigued the girls because who on earth was Fred F. French, and Klara's mother, who knew things, who worked for a social service agency and studied child psychology, who followed world events and worried about China, who planned these outings systematically, did not have a clue to the identity of Fred F. French, and this intrigued the girls even more, intrigued and amused them, they were thirteen and fourteen and everything amused them.


Fred French becomes a running joke between them. They ride home after sightseeing on the Third Avenue El. . .

. . .looking out the train windows into tenement apartments on both sides, hundreds of film-flickering lives shooting past their eyes forty feet above the street, and Rochelle might see an undershirted man leaning tousled out his window and, Maybe that's Fred F. French, she'd say, he's had a streak of bad luck, ha ha. . .


Several years later, boy-crazy Rochelle is petting with Bob in the backseat of a car, with Klara similarly engaged in the front seat.

. . . And at the all-crucial moment Rochelle Abramowicz looked over the boy's shoulder into the eyes of Klara Sachs and said to her, thoughtfully, What do you think the F stands for?
And Klara said, What F?
And Rochelle said, The F in Fred F. French.
This was a good thing to say, maybe it was the best thing anyone had ever said, then or now, under the circumstances, and it made them friends again.


Underworld is not only a bestseller, but also a National Book Award nominee and a finalist for the Pulitzer Prize.
Email ThisBlogThis!Share to TwitterShare to FacebookShare to Pinterest
Labels: 1990s, Fred French, Tudor City Lit