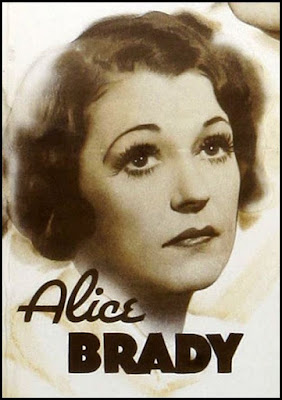 ✫ Makes Broadway debut in 1911 in the chorus of The Mikado, the start of an acclaimed stage career. Appears in everything from light comedies to the original production of Eugene O'Neill's Mourning Becomes Electra.

✫ Augmenting her nighttime stage work, Brady acts in silent movies during the day. At the time, New York City is the center of the film industry, and she's soon considered one of its top draws, going on to make 53 silent flickers.

✫ Transitions easily to talking pictures in 1933, with starring roles in 'B' movies and supporting parts in such 'A' titles as The Gay Divorcee, The Gold Diggers of 1935, My Man Godfrey, One Hundred Men and a Girl, and Young Mr. Lincoln.

✫ Wins a Best Supporting Actress Oscar in 1938 for her portrayal of Mrs. O'Leary (owner of the cow that started the great Chicago fire) in the film In Old Chicago.

In 1932, she takes a four-year lease on a Windsor Tower penthouse for $22,000 ‒ or $458 per month, a not unsubstantial sum during the Depression. She remodels the place and installs a French bistro‒esque living room, complete with a piano and a chic zinc-and-mahogany bar.

Soon thereafter, she has some financial setbacks. In 1935, a tax warrant is filed against her for nonpayment of $1,550 in income taxes. (She defends a $750 deduction for massages on the grounds that "beautification is a legitimate business expense" for an actress, "just like a depreciation allowance for industry"). The following year, she's living full time in Hollywood and is sued for $8,600 by Windsor Tower for breach of her four-year lease.

The outcome of this suit is unknown. Brady's health swiftly declines, and she dies of cancer, aged 46, in 1939.