This edition of our Confidential series ‒ a walk on Tudor City's wilder side ‒ tells the tale of Eleanor Campbell, Manor resident, sun worshiper, and jewel thief.

Her 10-day-long crime wave begins after she steals a passkey from The Manor's telephone switchboard room and robs six apartments. Detectives are called in to investigate, and spot her exiting an apartment (not her own), clad in a thin robe and bathing suit.

She darts up to the roof's sundeck. When the detectives arrive, she's sunbathing and apparently mending a handkerchief. In fact, the passkey is hidden in the hankie. The detectives are wise to her ruse. "That's the first time I've ever seen anybody sew with a door key" one comments dryly. Caught red-handed, Eleanor confesses to the thefts. "OK, I guess that's that," says she.

But once at the police station, she changes her tune, stating "This is a case of mistaken identity." Her attorney chimes in that the charges are "all wet." Nonetheless, she's specifically charged with the theft of a diamond pin, valued at $100. The tabloids have fun with the story, dubbing her "Lady Raffles" (after the fictional gentleman thief, Raffles, played in the movies by Ronald Colman).

The pin is later recovered from a nearby pawn shop, so the owner declines to press charges, and the case is dismissed. Eleanor gets off with a stern admonition from the magistrate: "You had better try to correct your ways, or you will go to one of the women's prisons."

Below, Eleanor arriving at court with her lawyer. Photo and caption from the Daily News. 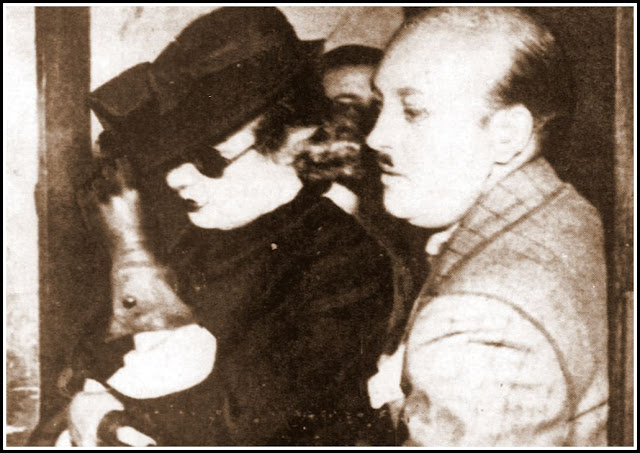 Miss Eleanor Campbell, 26, her eyes shielded by sunglasses, is taken into Criminal Courts Building yesterday. The attractive blonde is accused of being a 'Lady Raffles' who robbed six tenants in the Tudor City apartment house where she makes her home. She was held in $500 bail for hearing next Friday.(NEWS foto)