The High-Rise Over 42nd Street That Never Was

It is September, 1972. Harry Helmsley, the new owner of Tudor City, has previously announced plans to replace the enclave's parks with apartment towers. Opposition from community and civic groups was so vehement that he now has a counter proposal, and a rather outrageous one at that ‒ building a 52-story tower over 42nd Street, thereby saving the parkland. It would be the first building in Manhattan to straddle a commercial artery.


Reaction to this proposal is typified by the Daily News' mince-no-words editorial, below. 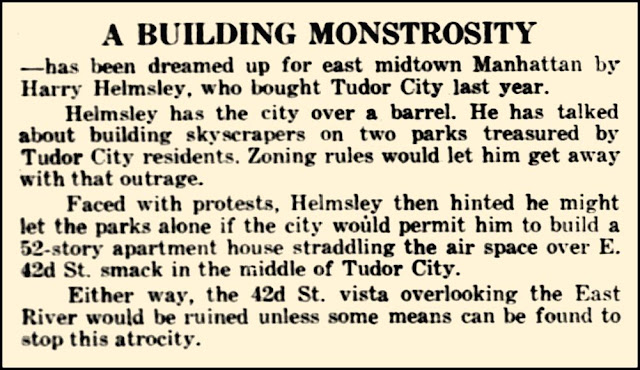 
Mr. Helmsley is said to favor one very large building on a bridge over 42nd Street. This Pan-Am-type of monumental obstruction would block the East River except for a view under its nose. This is a poor solution.

By far the best proposal is one to shift the air rights over the parks to another part of midtown Manhattan entirely. . .

Transferable air rights was a relatively new concept at the time, enacted in 1961 during a revamp of city zoning regulations. Helmsley likes the idea and abandons his plans for a 42nd Street tower, but air rights prove to be a thorny, complex issue that drags out the battle over the parks for years to come.
Email ThisBlogThis!Share to TwitterShare to FacebookShare to Pinterest
Labels: 1970s, Harry Helmsley