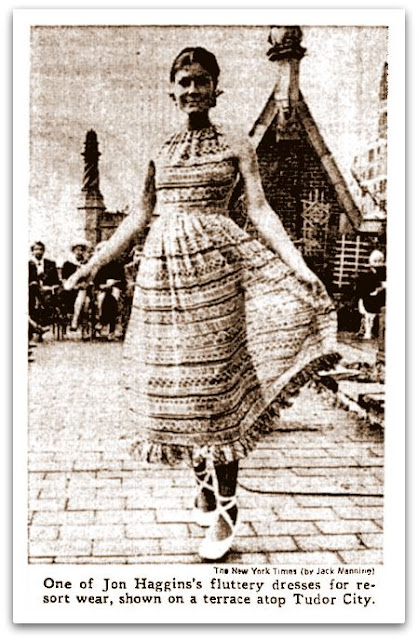 There have been countless weddings in Tudor City over the last 90 years, but one of the more unconventional ones took place in 1970 on a penthouse terrace atop No. 25.

The groom was Jon Haggins, fashion designer, and the bride, June Murphy, a model. It had been a whirlwind, six-month  courtship. When it came time to set the date, Haggins had a brainstorm, spelled out in the wedding invitation: Jon Haggins is in high spirits because he's going to marry June Murphy and present his holiday, resort and spring collection on the same day!

The hybrid event was held on the penthouse terrace of a Tudor Tower resident who was a friend of the groom. Most of the guests were press people intrigued by the gimmick of a fashion show ending with a wedding. Fashion shows at the time often ended with a bride, but never a real one.

It was the '70s, so the bride and groom both wore purple, she in purple chiffon with a matching scarf, he in a purple shirt and bow tie. The ceremony was Unitarian. At one point the wind caught the bride's long scarf and wrapped it around the couple, which was widely seen as good luck.

It was not a lucky union, however, ending after a year and a half. Years later, Haggins told the Times "we just had different visions." Despite "a bitter divorce," he confessed he "still has a little thing for her. It's something I never got over."

Thank you to David Reiff for the tip.

REMINDER: The lighting of the enclave's Christmas tree takes place tomorrow night, Dec. 6th, at 6:30 pm in the South Park. This has been an annual Tudor City tradition since 1927, don't miss it!