PROPOSING A JOB FOR A STEEPLEJACK


The above photo of a Tudor City weathervane ran in the Daily News on October 8, 1931, illustrating an editorial titled "Proposing a Job for a Steeplejack." The piece urged readers to end the ever-worsening Depression by spending their way out of it. A heavily edited transcript, below. 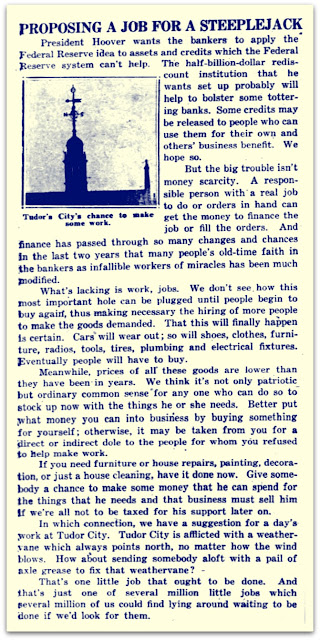 PROPOSING A JOB FOR A STEEPLEJACK

. . . The big trouble isn't money scarcity. . . What's lacking is work, jobs. We don't see how this most important hole can be plugged until people begin to buy again. . . That this will finally happen is certain. Cars will wear out; so will shoes, clothes, radios and electrical fixtures. Eventually people will have to buy.

Meanwhile, prices of all these goods are lower than they have been in years. We think it's not only patriotic but ordinary common sense for any one who can do so to stock up now. . . If you need house repairs or just a house cleaning, have it done now. Give somebody a chance to make some money that he can spend for the things that he needs.

In which connection, we have a suggestion for a day's work at Tudor City. Tudor City is afflicted with a weathervane which always points north, no matter how the wind blows. How about sending somebody aloft with a pail of axle grease to fix that weathervane?

Whether or not the French Company repaired the weathervane is lost to history. More about the colony's all-but-gone weathervanes here.

Email ThisBlogThis!Share to TwitterShare to FacebookShare to Pinterest
Labels: 1930s