Today, a look back at May 24, 1980, when Tudor City took on Harry Helmsley over the fate of its parks. It was written just days after the events, and is taken from the June 1980 Tudor City Association newsletter.

TUDOR CITY'S 1980 PEARL HARBOR DAY began Saturday morning May 24th at 7 a.m. when truckloads of lumber and about 20 workmen arrived at the North Park to start construction of a wall around the park. Lisa Ericsen alerted Tudor City Association President John McKean, who, thorough the use of a bullhorn, immediately called residents for emergency action. Even though it was Memorial Day weekend, the community responded at once! Within 30 minutes, over 200 people were on the street. In another 30 minutes, they had removed all of the lumber from the park and police arrived in force. Meanwhile, TCA was searching for a lawyer and a judge, both difficult to find on a holiday weekend.

They finally got a restraining order, but things were far from resolved.

VOLUNTEERS SLEPT in the park Saturday night ‒ fortunately ‒ because at 7 a.m. on Sunday, Fay Weprin reported the arrival of more lumber, workmen and a bulldozer.  Disregarding the restraining order, Helmsley was attempting another attack. Careful advance planning was evident ‒ when the bulldozer arrived, a lady unknown in Tudor City jumped into a car and drove away, clearing the way into the park. About a dozen residents formed a human chain in front of the bulldozer. Police responded quickly to call for help and ordered the bulldozer and workmen out.
And so it went for several days. When the courts lifted the ban, the workers continued to build the wall. The TCA took the politics out on the street and picketed Helmsley's office and home. Then, realizing he was losing the public relations battle, Helmsley backed down and agreed to remove the wall, and give fifteen days notice before resumption.
ON TUESDAY,JUNE 3,HELMSLEY TOOK DOWN HIS WALL, a happy ending to ten bad days. However, we must remember this is only a battle we've won, not the war. The entire community can be happy about its courage against overwhelming financial power, and we can all be proud to be a part of a community that has again defended itself effectively.

⸺⸺
For further reading, check out the entire document. 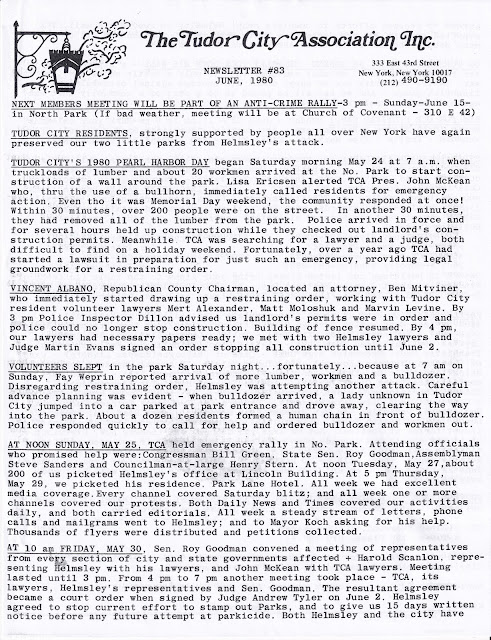 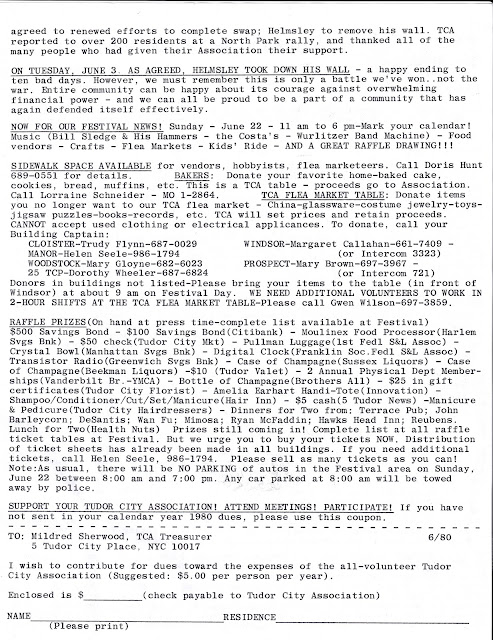