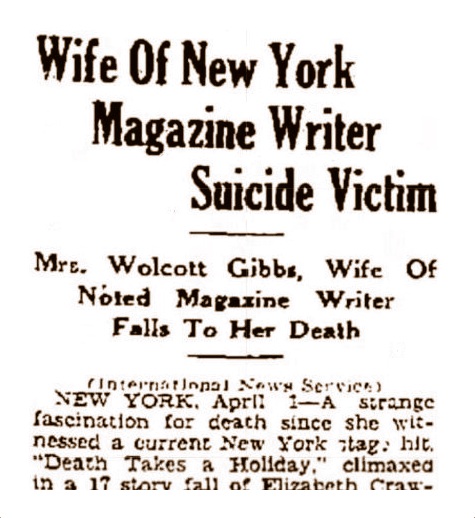 This edition of The Confidential examines the sad, strange suicide of Elizabeth Crawford Gibbs, who leaped to her death from her Prospect Tower apartment on March 31, 1930.

She was a newlywed, married to writer Wolcott Gibbs since August, 1929. He was 28, she was 22. Both worked at the New Yorker, she as a promotional writer, he as an up-and-coming writer/editor (the magazine itself was rather new, having started up in 1925). The couple had married rather impulsively, and she soon discovered her wry, urbane husband was actually a chainsmoking alcoholic with a depressive streak.

Days before Mrs. Gibbs' suicide, they had gone to see a Broadway hit, "Death Takes a Holiday." The play tells the story of Death coming down to earth for a three-day holiday, falling in love with a woman there, and taking her with him when he leaves. The drama supposedly fascinated Mrs. Gibbs, and several days later, she discussed it with her husband and sister over lunch in the Gibbs' apartment. Then she excused herself, went into the bedroom and jumped out the window.

The tabloid press liked the girl-ruined-by-a-play angle and ran with it. Below, sample headlines from papers around the country. 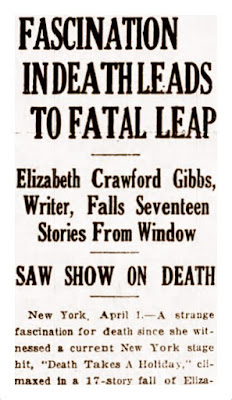 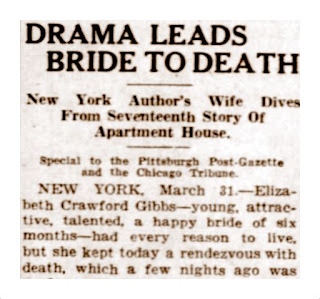 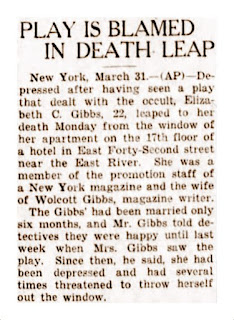 However, Wolcott Gibbs biographer Thomas Vinciguerra disagrees, finding the "sees-play-kills-self" narrative rather improbable, and suggests some alternate versions. One account has the writer John O'Hara present that fateful day, talking with Gibbs and freezing Mrs. Gibbs out of the conversation, sending her over the edge. Another version says Gibbs mocked his wife's writing ability so relentlessly that it finally drove her to suicide.
Distraught, Wolcott Gibbs moved from No. 45 to the Village immediately after his wife's death. He remarried (again on impulse) a year later and was named drama critic of the New Yorker in 1938, remaining in that post until his death in 1958. Though overshadowed by colleagues like E.B. White and James Thurber, Gibbs was an instrumental figure in the New Yorker's early, formative years.
Email ThisBlogThis!Share to TwitterShare to FacebookShare to Pinterest
Labels: 1930s, Confidential, Prospect Tower / No. 45, Residents