Some time ago, we posted an overview of Tudor City's historic parks, and today we're zooming in on the South Park, opposite No. 25.

The site originally houses a miniature golf course, a publicity windfall for the French Company that was originally conceived to distract from all the construction chaos around it.

But by mid-1930, most of the construction is complete and the miniature golf craze is starting to wane, so it's decided to reconfigure the site into a formal park. The Tom Thumb course moves across the street to the vacant lot that would later be used for tennis courts.

Designed in the same formal English style as its northern cousin, the South Park has a similar gatehouse entrance and identical lamp posts. In addition, two octagonal gazebos, made from heavy timber, are set in its northeast and southeast corners. 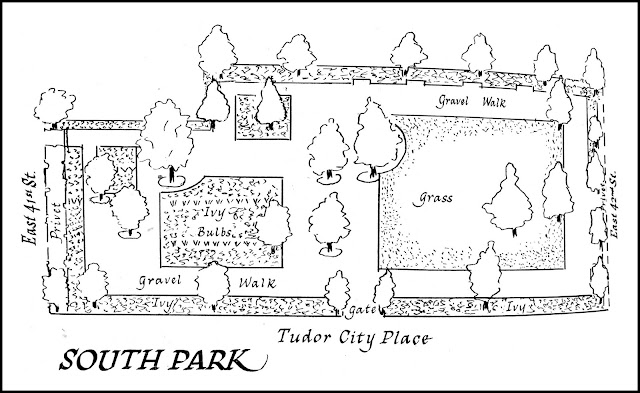 In 1952, the South Park is narrowed by 22 feet to widen Tudor City Place as part of the neighborhood upgrades for the arrival of the United Nations. The gatehouse and gazebos are removed, and the park is reconfigured as shown above, roughly the same layout it has today.