STRANGE BUT TRUE : The Gal, The Gob, The Diamond Ring, and The Carrier Pigeon

Today's Strange But True entry recounts the believe-it-or-not story of Pete the carrier pigeon, who flies a diamond ring cross country to a lucky lady in Tudor City.

Here's the story, verbatim, as reported by INS (International News Service, a competitor of AP and UPI). It runs in syndication across the country.


Pete the Pigeon came through. He brought you a note and a diamond ring from Larry, and police of the West 47th St. station are keeping them for you.


Pete was eating corn with other pigeons in a leisurely manner in front of the Public Library on Fifth Avenue Sunday afternoon when Howard Lax noticed him. There was a carrier capsule on Pete's leg, and a diamond ring attached by a piece of wire.

Lax took the bird to the police station. Police opened the capsule.

First of all, it was addressed to Miss Calloway at Windsor Tower, Tudor City, Manhattan, and was from Larry Nicehazo, US Navy, Setkan, Alaska.

"This comes to you with all my love. Wear it until I get back in August, and we can make it official. 'Pete' is bringing it to you. He arrived in San Diego as we were leaving, and this is the first chance I've had to acknowledge his receipt. Love, Larry."

Police learned that Miss Calloway had moved. They found her roommate, Miss Elbrun Bomboy, who was to explain the situation to Miss Calloway when she returned from a cocktail party.

Miss Calloway is 22, a salesgirl, and comes from Illinois. She occasionally mentions her sailor friend, who was here last summer.

Pete is now at the ASPCA shelter, waiting a claimant. His registration number is TFC 142 AU 1935.

The trail goes cold here ‒ although things don't sound too swell for lovelorn Larry, whose would-be fiancée 1) speaks of him only "occasionally" 2) has changed her address without telling him and 3) can't be reached because she's out at a cocktail party. Pete's prospects are similarly dismal. 'Rescue pigeons', then and now, are an oxymoron.

At least the papers had some fun with it. 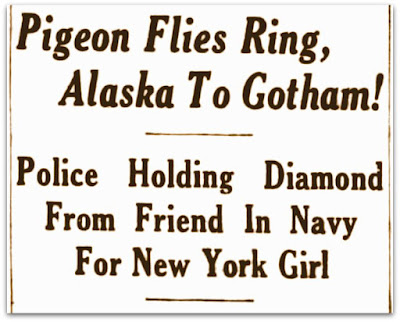 Email ThisBlogThis!Share to TwitterShare to FacebookShare to Pinterest
Labels: 1930s, Strange But True, Windsor Tower / No. 5