Resident of the Day is Leon Gordon, a renowned portrait painter and tenant of No. 5, one of many artists drawn to Tudor City. Here is his life, in bullet points:

❀  Born in Russia, 1889, immigrates to America where he studies at the Art Institute of Chicago. Clearly talented, he quickly finds work doing illustration and portraiture.

❀ Makes his name in 1930 with a commission to paint America's Twelve Greatest Women for Good Housekeeping magazine. He goes on to do portraits of many significant figures of his time ‒ among his sitters are Calvin Coolidge, Eleanor Roosevelt, Helen Keller, Winston Churchill and Willa Cather.

❀  Takes a studio for his burgeoning business in the Beaux Arts Building overlooking Bryant Park. In 1938, the studio catches fire (destroying a lot of his work) and he relocates to a penthouse studio in Windsor Tower.

❀  Gives an interview to Tudor City View for an article entitled GORDON GETS THE BIG ONES  ‒  WIELDS FAMOUS BRUSHES FOR FAMOUS SITTERS. Some questions and answers: How does he get his famous subjects to relax? "A fairly active line of conversation." What does he think of Tudor City? "I've been surprised by my contentment here. . . The river view and Long Island vista are wonderful, soothing, refreshing from the hub-bub of the city streets. . . The Tudor City management is to be congratulated upon what it has done in the heart of this busy city."

❀ He apparently cuts quite the colorful figure in the community. Below, an item from Charles Driscoll's column, New York Day by Day, October 3, 1938. 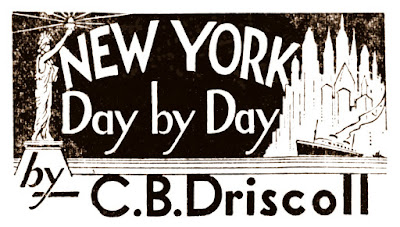 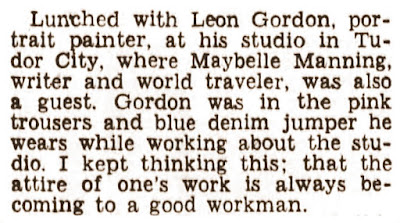 Gordon dies of a sudden heart attack in 1943, aged 54. He leaves behind some beautiful work, samples below.