In breaking news, there was some excitement in the colony Wednesday morning after a fire broke out in an apartment in Windsor Tower. 78 firefighters and a fleet of trucks arrived on the scene, quickly containing the fire without any injuries. The FDNY ruled the fire "accidental, caused by cooking."

What made the story newsworthy was its rather unlikely hero, a black terrier schnauzer named Scotch. The sole occupant of the apartment where the fire broke out, Scotch managed to open the window himself, allowing the firefighters to climb up and rescue him. "He does it all the time, he loves to do it," said his owner, Susan Capozzoli. "With his nose, he opens the latch and then he pushes the window out."

A human interest story if there ever was one, Scotch's rescue ‒ via fire ladder ‒ ran in the Post, the News, and on local affiliates of ABC and CBS.

The daring rescue, above. Scotch reunited with his owner, below right. 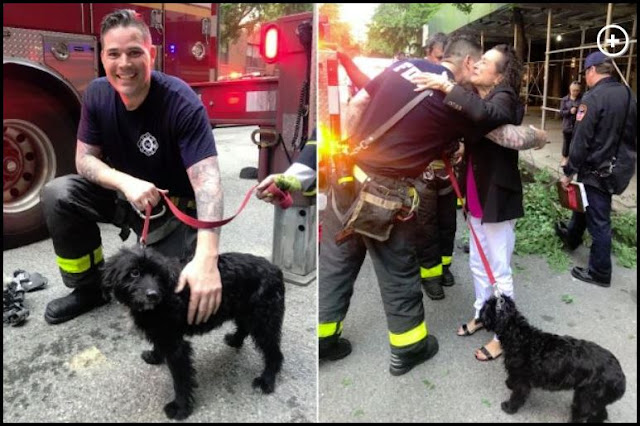 More about Tudor City and dogs, here.
Email ThisBlogThis!Share to TwitterShare to FacebookShare to Pinterest
Labels: 2010s, Strange But True, Windsor Tower / No. 5