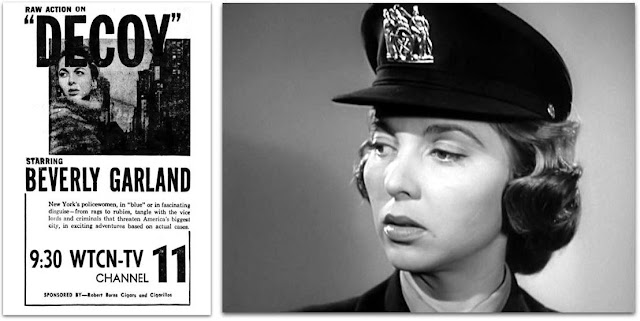 This installment of Tudor City on Film looks back at Decoy, a '50s TV series about an undercover policewoman, said to be the first show to feature a female cop as its star. Set and shot in New York City, Decoy premiered on October 15, 1957, and ran in syndication for 39 episodes.

Its star, Beverly Garland, was a B-movie actress better known for her television work, appearing in everything from My Three Sons and The Twilight Zone to Magnum, P.I. and Friends. On Decoy, she plays Casey Jones, an undercover cop who impersonates various characters ‒ drug addicts, babysitters, nightclub photographers, exotic dancers ‒ to solve crimes.


Amazingly enough, this title sequence has absolutely no bearing on what follows, and is only vaguely explained ‒ Jones is driven to a crime scene, where a detective looks at her evening gown and asks what she's been working on. "Narcotics," she replies coolly, with no further explanation.

A big thank you to Anne Stoddard and Debra Register for sharing this gem!
Email ThisBlogThis!Share to TwitterShare to FacebookShare to Pinterest
Labels: 1950s, Movies, Tudor City Bridge, Tudor Gardens / No. 2