Returning to our Confidential series, we turn to resident Peg Entwistle, forever remembered as the "Hollywood Sign Girl." Hers is a sad story.

Born in Wales in 1908, Peg comes to New York with her father in 1913. She dreams of being a stage actress, and makes her Broadway debut at the age of 17. She has talent, and is soon invited to join the prestigious Theatre Guild, touring the country doing repertory.

A young Bette Davis sees Peg perform in Boston in 1926, and later says "the reason I wanted to go into theater was because of an actress named Peg Entwistle. She looked just like me. A whole new world opened up to me."

Peg's personal life is not as charmed. She marries an alcoholic actor and discovers he has an ex-wife, a son, and overdue alimony and child support. He runs through her money. She divorces him.

In 1931, returning to New York after an extended stint on the road, Peg rents an apartment in Tudor City, which she shares with her best friend. Peg's name is on the lease.

Then Hollywood calls in the person of David O. Selznick, who offers her a term contract at RKO Studios. She much prefers the stage to the flickers, but the money is so tempting that she breaks an existing Broadway agreement ‒ burning some serious bridges ‒ and decamps to Hollywood. RKO eventually assigns her a small part in a forgettable picture, Thirteen Women. Shortly after the picture wraps, she's fired by RKO, part of company-wide cutbacks necessitated by the Depression.

Devastated, on September 16, 1932, Peg heads for the Hollywood Sign. At the time, it was the Hollywoodland Sign, erected to advertise a real estate development. The flimsy sign is constantly in need of repair, so workmen leave ladders in place behind each letter. Peg climbs up to the top of the 'H' and jumps off. She leaves a note behind:


I am afraid I'm a coward. I am sorry for everything. If I had done this a long time ago it would have saved a lot of pain. P.E.

Her body is discovered two days later in a ravine 100 feet below the sign. She is 24 years old.

Her suicide is a sensation in the press. 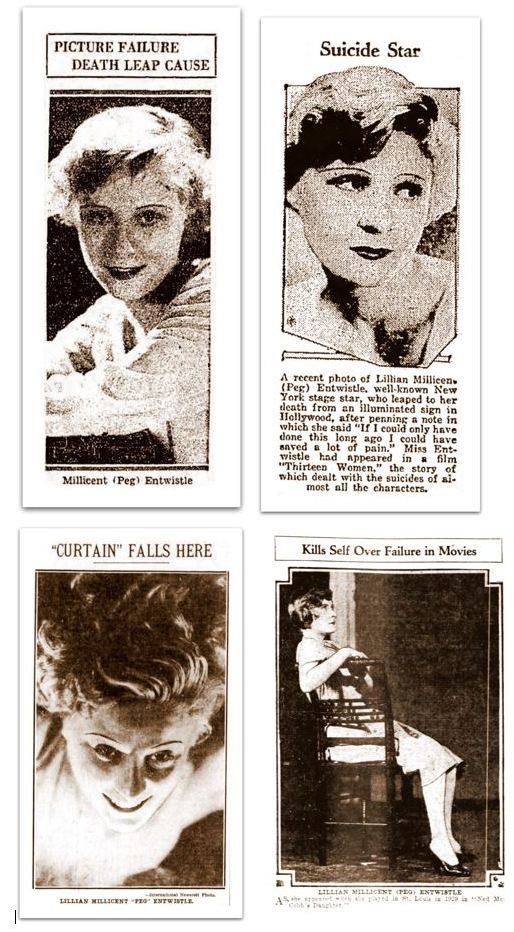 Back in Tudor City, Peg's roommate has fallen so far behind on the rent that she is evicted. James Zeruk, Peg's biographer, reports that "most of Peg's possessions, including her furniture, wardrobe and jewelry, were held against the back rent she owed to the Tudor City management ‒ she would never recover them."

Over time, Peg becomes a cult figure, bubbling up into the culture every now and then ‒ as the subject of a British musical, inspiring songs from Steely Dan and Dory Previn, and most recently in Lana Del Rey's Lust for Life video, shot atop the Hollywood Sign.