Continuing our profiles of noted Tudor City residents, here is C.D. Batchelor, a Pulitzer-Prize winning editorial cartoonist who lived in Haddon Hall for about 30 years. His life, in bullet points:

✦ Born in Kansas in 1888, he arrives in New York in 1923, and quickly establishes a name for himself as a talented illustrator.

✦ After a stint at the New York Post, he finds an enduring fit with the Daily News, where he's hired in 1931. He submits daily cartoons for its editorial page for nearly four decades. He's prolific, turning out much ancillary artwork for causes that he believes in, including over 1,000 drawings promoting highway safety.

✦ In Tudor City, he's known as 'Batch' and considered something of a character, usually sporting a homburg hat, ascot and cane. (He explains it's "just as easy to be a character as not to be one ‒ and a hell of a lot more fun.”) As a hobby, he collects canes, often trading original cartoons for antique walking sticks.

Below, his most famous work ‒ captioned "Come on in, I'll treat you right. I used to know your daddy" ‒ wins the Pulitzer Prize for editorial cartooning in 1937.

Batchelor resides in a Haddon Hall penthouse from the 1930s into the 1960s, apparently taking to heart the enclave's ad slogan, Live in Tudor City and Walk to Business. It's a three-minute stroll from Haddon Hall to the Daily News Building.

Below, a 1957 photo from Tudor City View showing Batchelor posing with a mural he has painted for the lobby of the Daily News Building. A 48-foot-long marvel depicting the history of communication, it is two years in the making (and no longer in place). 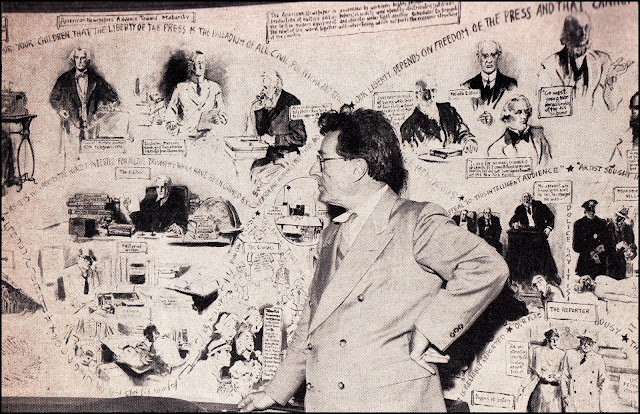 Batchelor moves out of Tudor City in 1966, retiring to his country home in Deep River, CT, where he passes away in 1977 at the age of 89.