Evolution of a LOGO

Our slogan ‒ Live in Tudor City and Walk to Business ‒ was in place from the very start. We believe it was created by the Huber Hoge ad agency, a well-regarded firm whose clients included Standard Oil and Smith & Wesson. The agency's fortunes, however, were fleeting. Hit hard by the Depression, it closed in 1931.

While Tudor City's slogan was set in stone, its logo design underwent some variations over time, the subject of today's post.

Above, the logo on an early newspaper ad, dated February 3, 1927, seven months before the first buildings opened. The slogan is there, but the layout a bit clunky.

In April, 1927, the words are rearranged in a more eye-pleasing manner.

Above and below, several attempts in early 1928 to completely reinvent the logo. None of them stuck.

The logo soon morphed back into an earlier format, above, and would remain unchanged for many years. . . 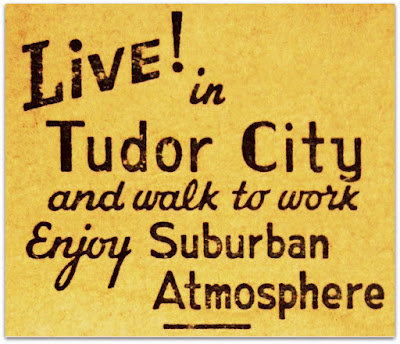 Detail of inside matchbook cover, circa 1942. What a difference an exclamation point makes!

Tudor City's print ads abruptly ceased in early 1943. There was no point: it was wartime, and a citywide housing shortage made promotion unnecessary. On top of that, all of Tudor City had just been put under rent control, mandating such low annual increases that nobody moved out. Print advertising for the enclave never returned ‒ except for a short stint in the '80s, when the complex went co-op.

More about the slogan here.